Last time we spoke with Sarasota immigrant Christophe Coutelle he was running C’est La Vie on Main St. and making plans to open his second restaurant, Lolita Tartine.  C’est La Vie began as a part of a plan to move from France and start a business in the US.  It was very successful, turning a profit within weeks!  So Christophe decided to build on his success.  Lolita Tartine opened on October 23rd and is now serving the delicious pastries and coffee that Christophe is known for as well as the new tartines, or open-faced sandwiches, wine, and other lunch and dinner items such as salads and stews.

Christophe invited ImmigrationSarasota.com to a cafe au lait at the new restaurant.

IS.com: This is a beautiful new restaurant, did you have a hand in designing it yourself?

Christopher Coutelle: Thank you.  Yes, this is one of the typical renovated spaces you see in the Rosemary District.  My friend, another Frenchman actually, introduced me to it.  At first I said I would think about it.  With time I decided this was the place to open Lolita Tartine. 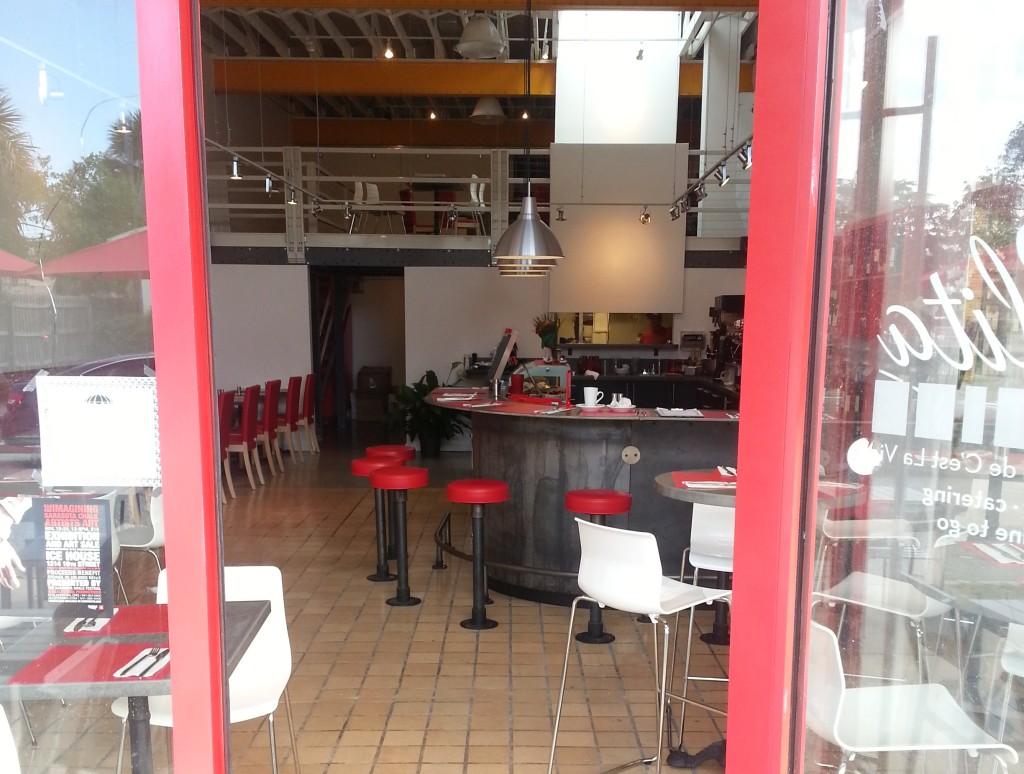 IS.com: You use a lot of red, an attention grabbing color, was that on purpose?

CC: The window frame is red so we went with that for the interior.

IS.com: I noticed the famous artists’ portraits on the wall.  Picasso, Dali, Delacroix, why them?

CC: We had help from the design studio next door.  We decided to name the different tartines after famous artists and we added their portraits on the wall for continuity.

IS.com: SO why not stick with what you know, pastries and coffee?  Why add lunch and dinner?

CC: My wife and I had seen a restaurant in France call Dame Tartine, short for Madame Tartine, and we had originally wanted to open a place like that in the States.  For business reasons we decided to open C’Est La Vie first.  But serving good food all day long is always something we wanted to do, and now we are.

IS.com: So how late is Lolita open?

IS.com: I noticed a large selection of wines behind the bar.  Are they all from France?

CC: At the moment, yes.  I have a friend who is an importer who finds good French wines.  But people have been asking and I am also thinking about expanding into Spanish, Italian, and Argentinian wines.

IS.com: Tell me more about the tartine.

CC: Well, it is an open-faced sandwich and I always say that if people want to know more they should come to the restaurant and try one!

You can find Christophe at his new restaurant most hours of the day.  We wish him all the best in his new endeavor.  Go and visit Lolita Tartine and let Christophe know where you heard about him.