Pedja Miletic is a Sarasota immigrant and perennial entrepreneur who knows what it means to work towards a dream.  Pedja was born in Serbia and lived in Vienna and London before moving to New York, and eventually, St. Pete and Sarasota.  His family owned and operated a watchmaking business which gave Pedja his first taste of entrepreneurship.

Pedja moved to New York City as a young man and worked in odd jobs at restaurants to make ends meet.  Eventually he met the proprietor of a trucking business on Long Island and began working for him.  After a year the proprietor gave Pedja the business.  The Serbian immigrant ran it until changing market conditions made it no longer profitable.  At that point he started a messenger service in the city, running small packages all over town.

Growing tired of the frenetic New York lifestyle Pedja began looking for a warmer, quieter place to live.  He found a city in Florida named St. Petersburg and, since his name is Peter, decided to relocate there.  He worked in restaurants and eventually got in to real estate.  Then the stock market crashed.

Readjusting to the financial setback, Pedja held down 3 part-time jobs to make ends meet.  He hated it.  Pedja is a perennial entrepreneur, he cannot stand working for someone else.  One day he said to his colleague:

“I’d rather be selling crepes on the corner of downtown [St. Pete] than sit here for another second!”

What began as an ephemeral idea in the mind of a disgruntled office worker soon grew into a plan for a new business.  In 2009 Pedja hit upon a name, World Bites, and developed a plan to sell slow-cooked peasant food from Serbia.

At this point Pedja needed financing to accomplish his dream.  Unwilling to burden himself with debt, and since banks weren’t lending at the time anyway, he raised capital himself through his part-time jobs.  He also enjoyed the assistance of his mother, Vicky, who played an integral part in launching World Bites.  Soon the pieces began coming together. 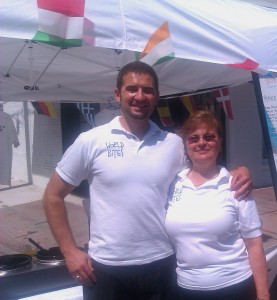 Pedja with his mother, Vicky

World Bites opened its doors on March 4.  The cuisine is a unique blend of East and West with German, Viennese, Turkish and even Prussian influences.  Pedja recommends the Chefs Favorites, especially the Potato Turkey Meatballs!  He has an innovative retention strategy: the Worldbites Passport Club.  Repeat customers receive a passport which Pedja stamps when they try different foods.  Benefits include discounts, weekly tastings, coupons, party invites, and more.

Pedja’s story represents the eternal optimism and dynamism that entrepreneurial immigrants like himself bring to this country.  Not content to work for someone else, bouncing back from difficulties that might discourage someone of lesser mettle, Pedja is now launching his dream business.  But he doesn’t plan to limit himself to a simple kitchen and catering business.  He has dreams of obtaining a food truck to take his unique culinary traditions on the road, and after that, franchising.  We wish him all the best.