On Saturday and Sunday November 3rd and 4th, an entire street in downtown Sarasota was blocked off and covered in chalk!  The Sarasota Chalk Festival has been going on for 3 years now and each year it gets better both in terms of the quality of the artists’ creations and the number of attendees.  This year was no exception.  Thousands of area residents crowded S. Pineapple Ave between S. Orange St and Ringling Blvd.  Dozens of artists from around the world rendered incredible images on the street.  Some spanned more than 40 ft square.  The most creative images were the ones that were stretched so as to seem 3-dimensional when looked at it from a certain angle.  With so much creativity on display it was no wonder that this year the Chalk Festival recorded record attendance!

Jaensch Immigration Law Firm is pleased to report that one of our employees volunteered at the Chalk Festival on Saturday.  Before getting to work he had some time to take a few photos.  Please enjoy. The “stretched” images have to be viewed from a certain point. 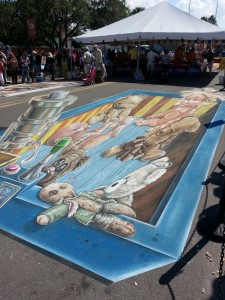 One of the “stretched” images at the Festival 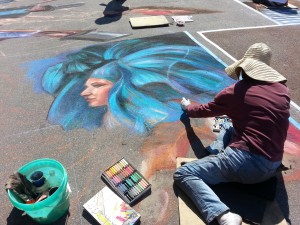 An image comes to life off the pavement.